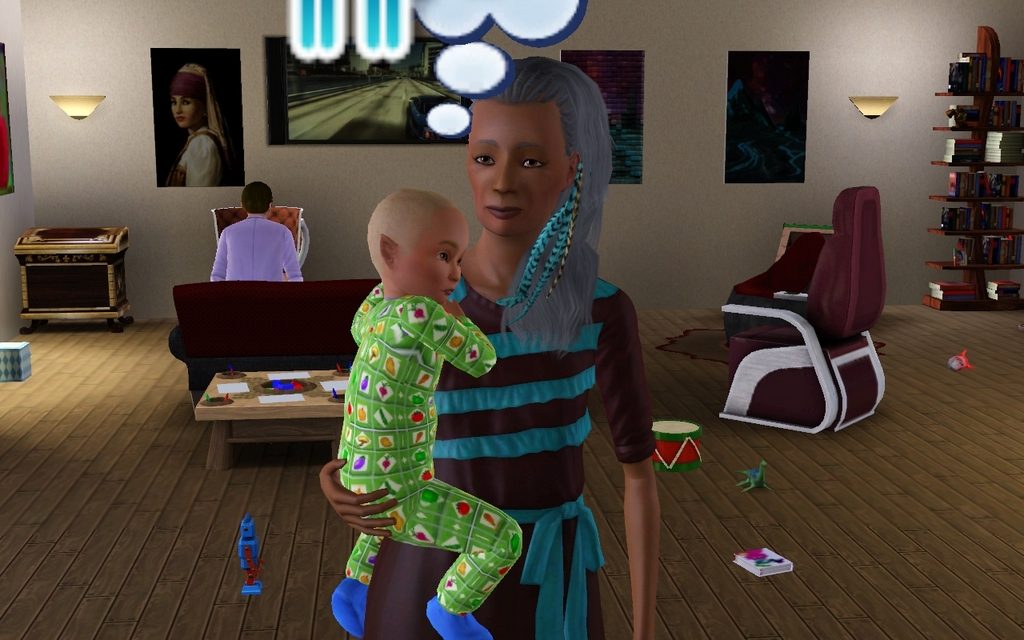 Connie: Why do I have a toddler at my age?

Arielle ages up at full moon. I can´t remember, why she´s in costume. It´s probably halloween. I do remember, that I was afraid, it would mess up her aging. 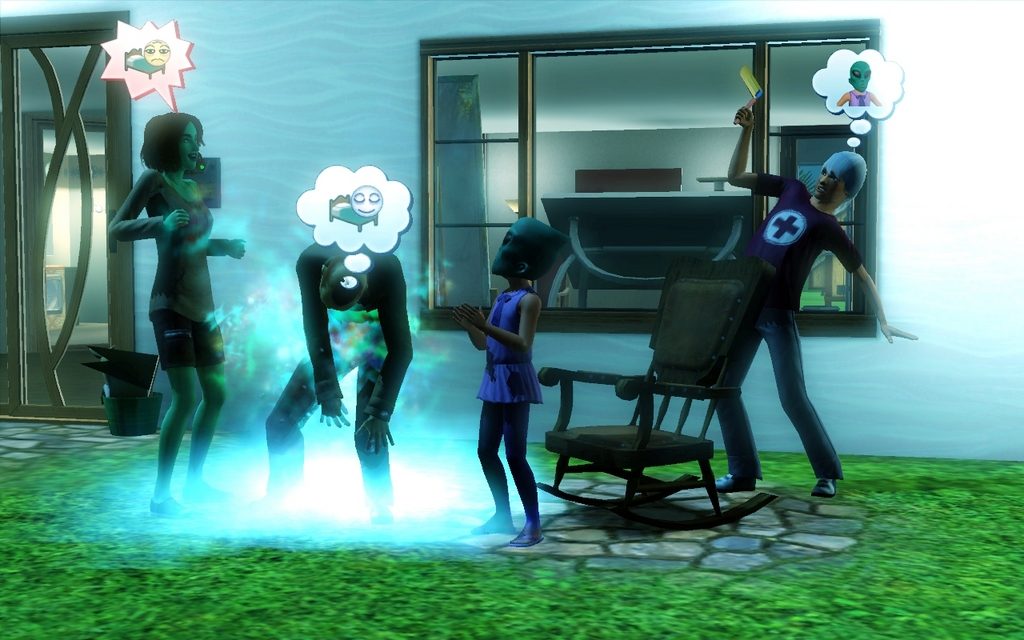 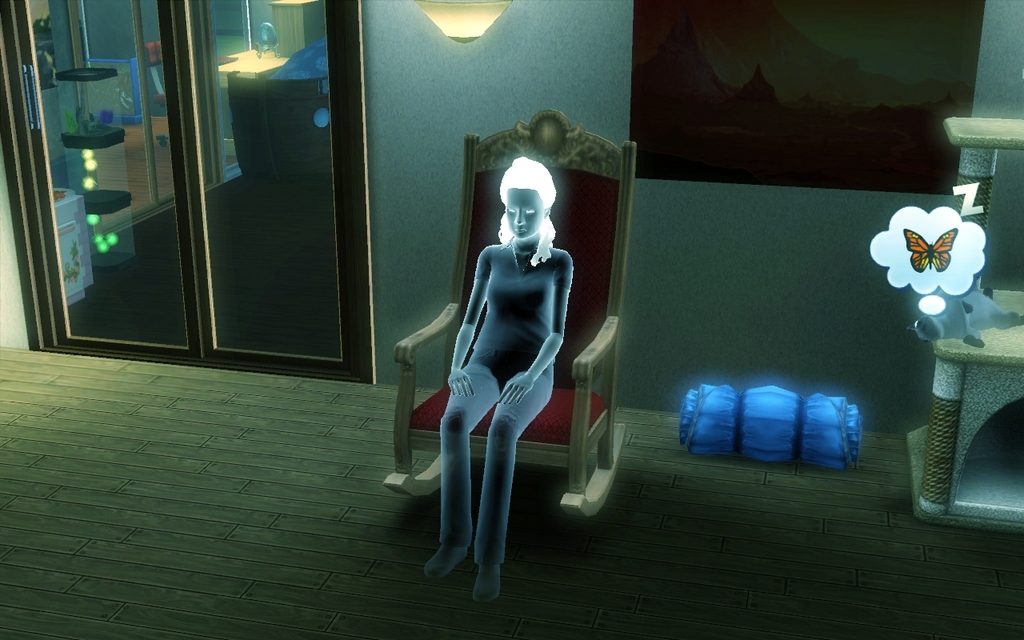 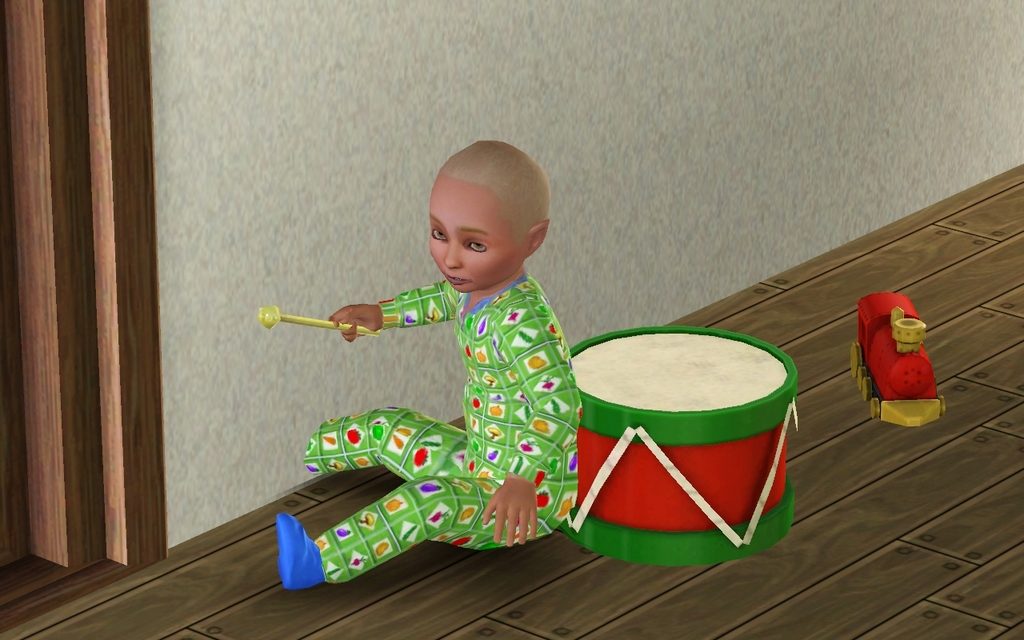 Arielle got her makeover. 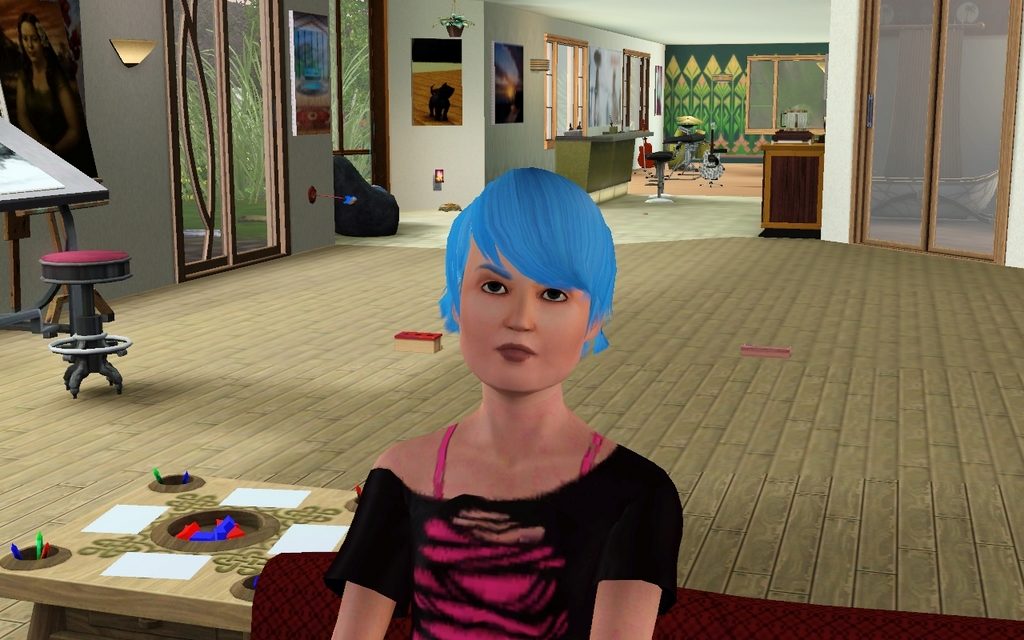 She seems to be a good mix of her parents. 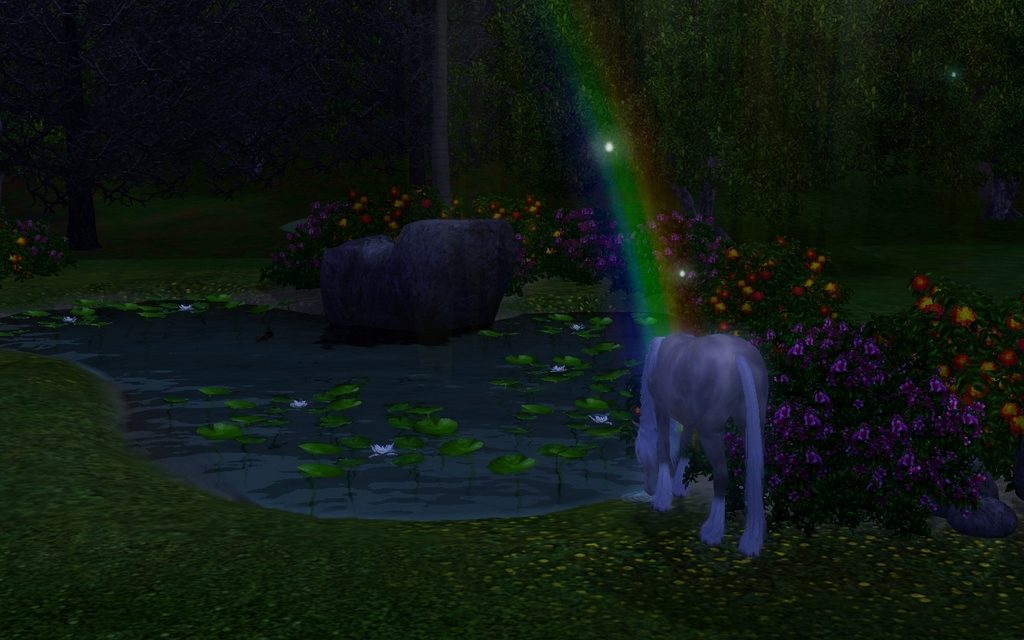 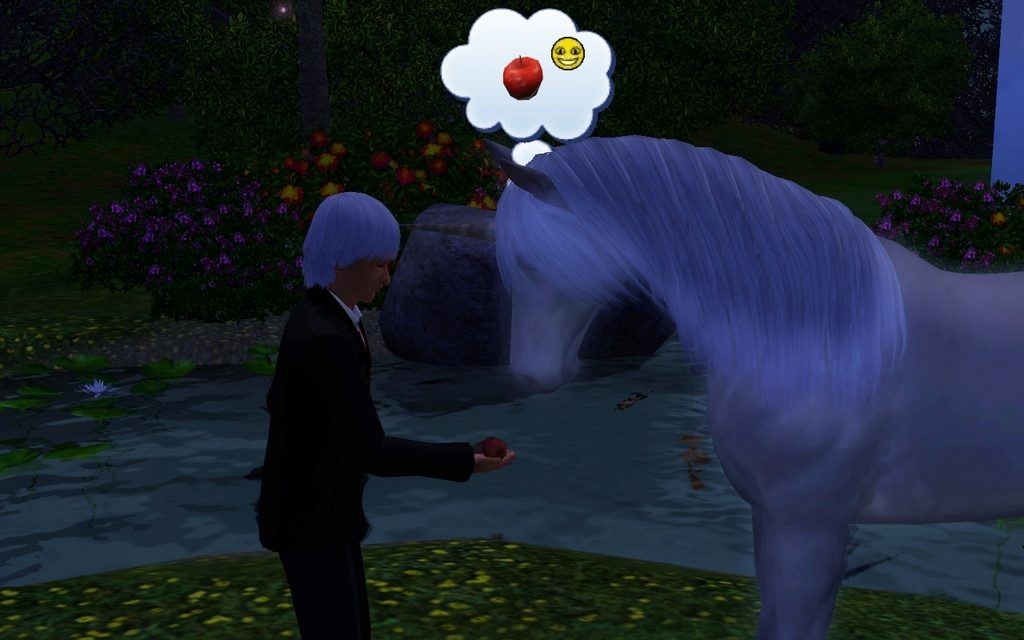 Randolph is in the vicinity and offers refreshments. 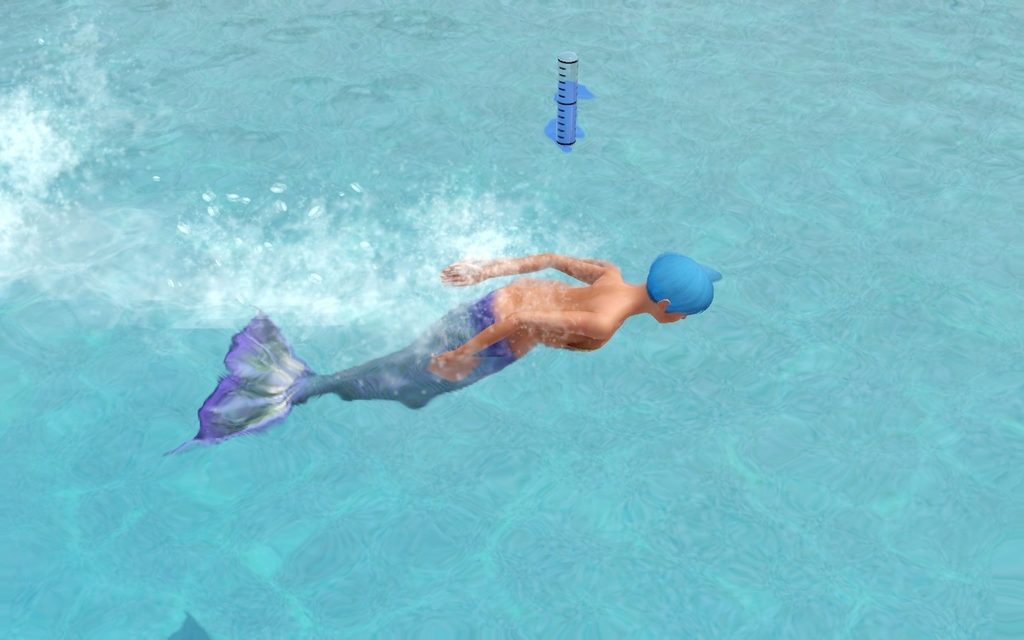 So, Arielle´s tail is blue. 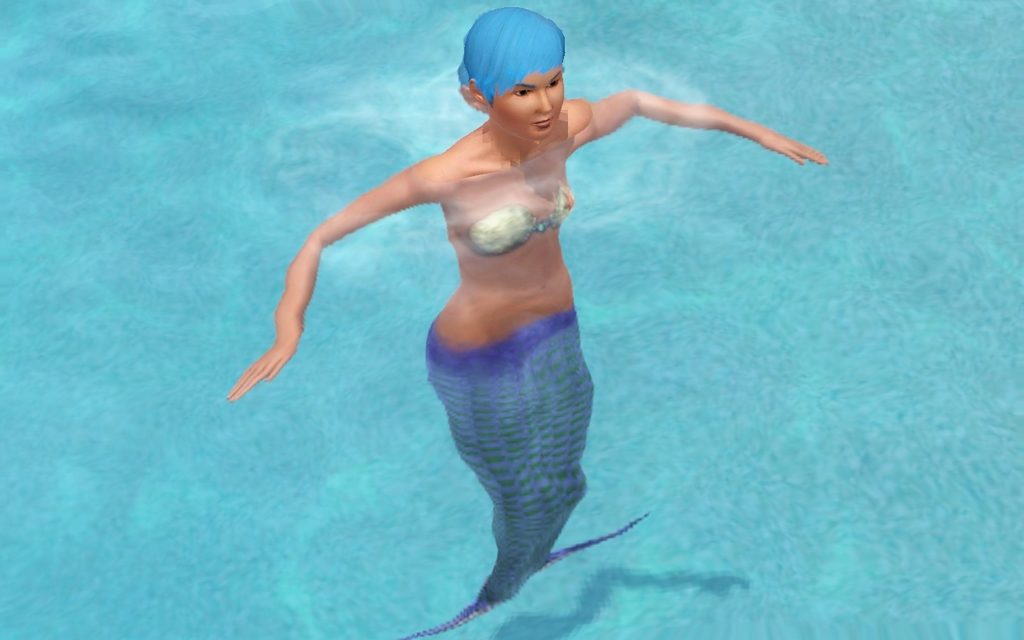 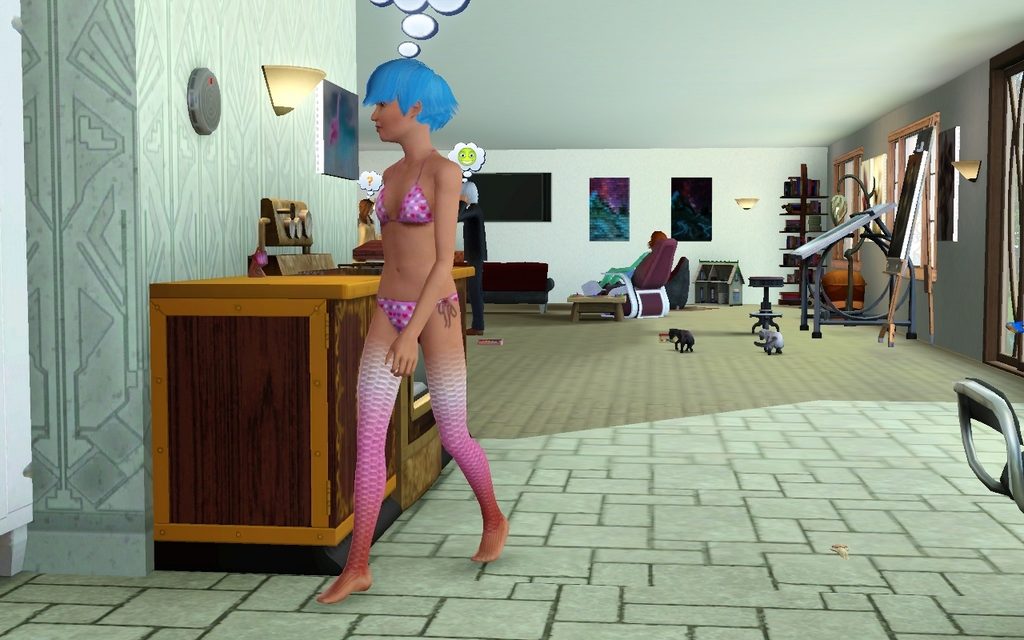 The scales on her land legs are pink.

I could change it, but I think, it´s funny. 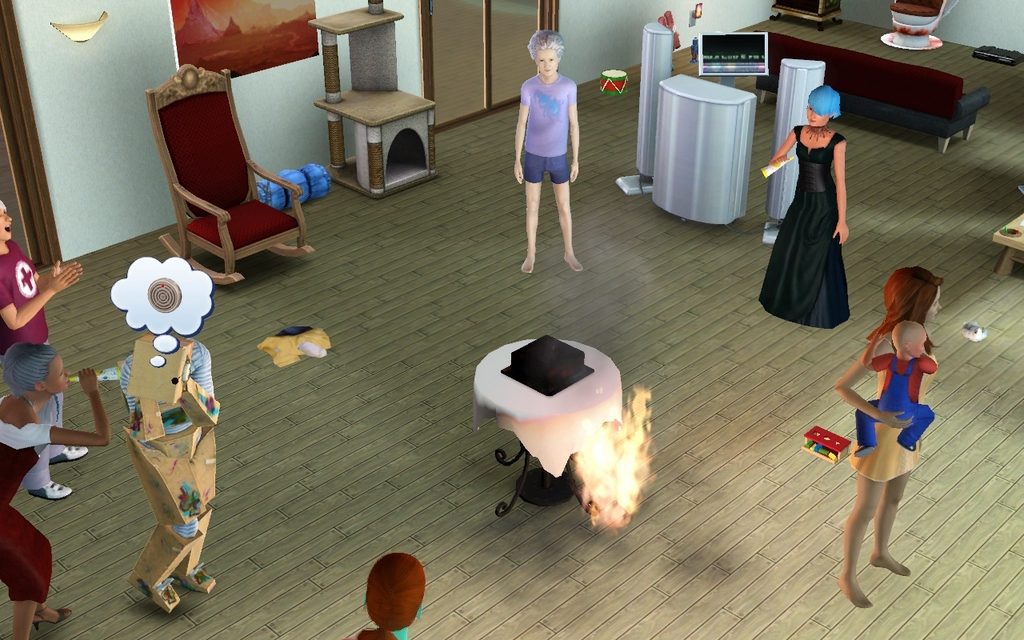 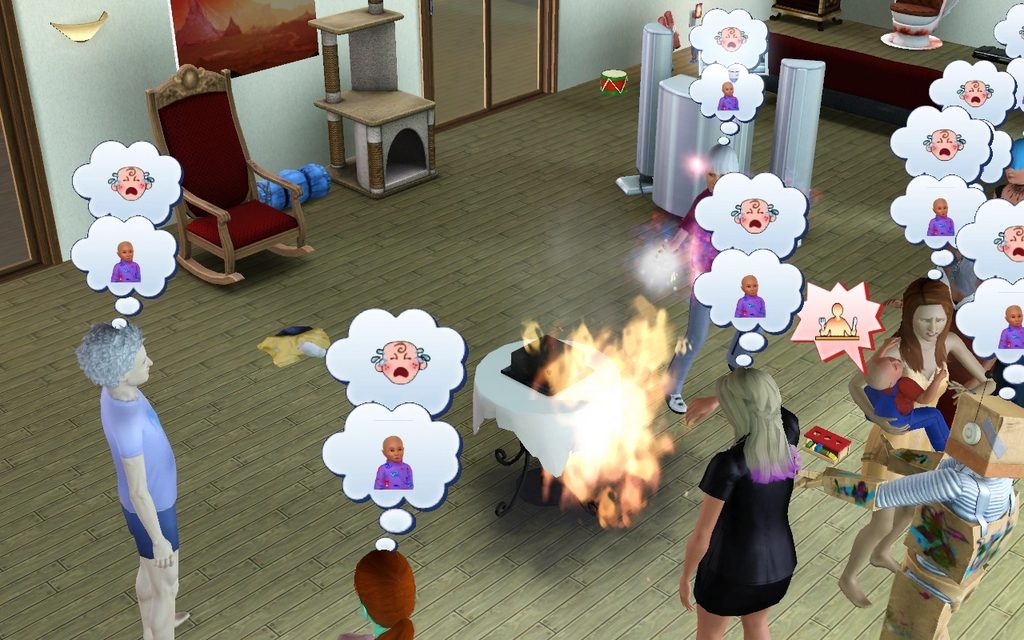 Yeah, the toddler is crying. Never mind the FIRE in the living room. 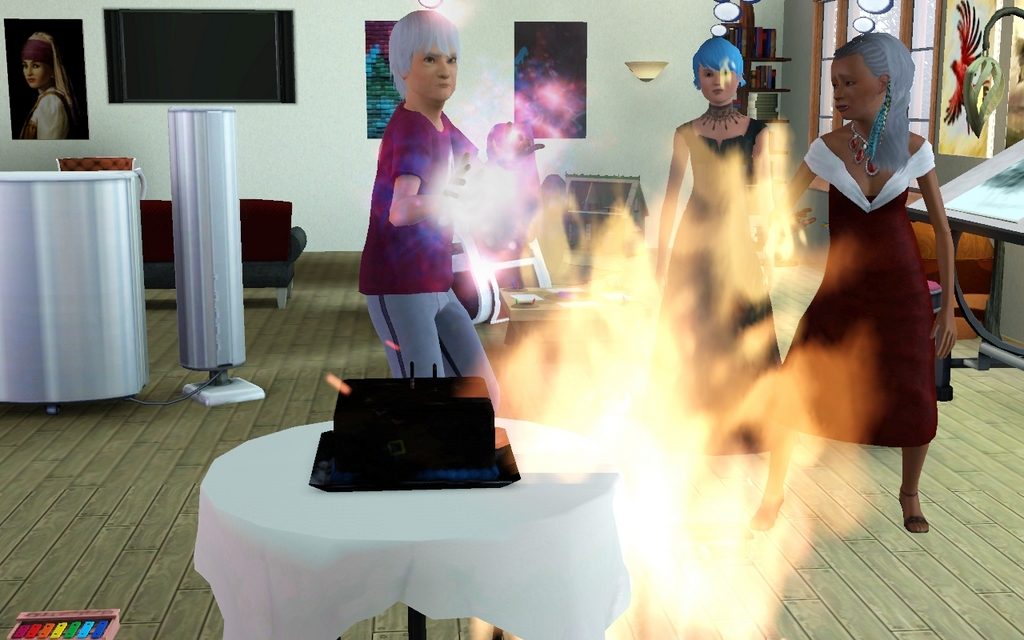 Randoph channels his mum, and puts it out.

Beverly thinks a party with a fire sucks, and leaves, just as the fire brigade pulls up and fines us for a false alarm. 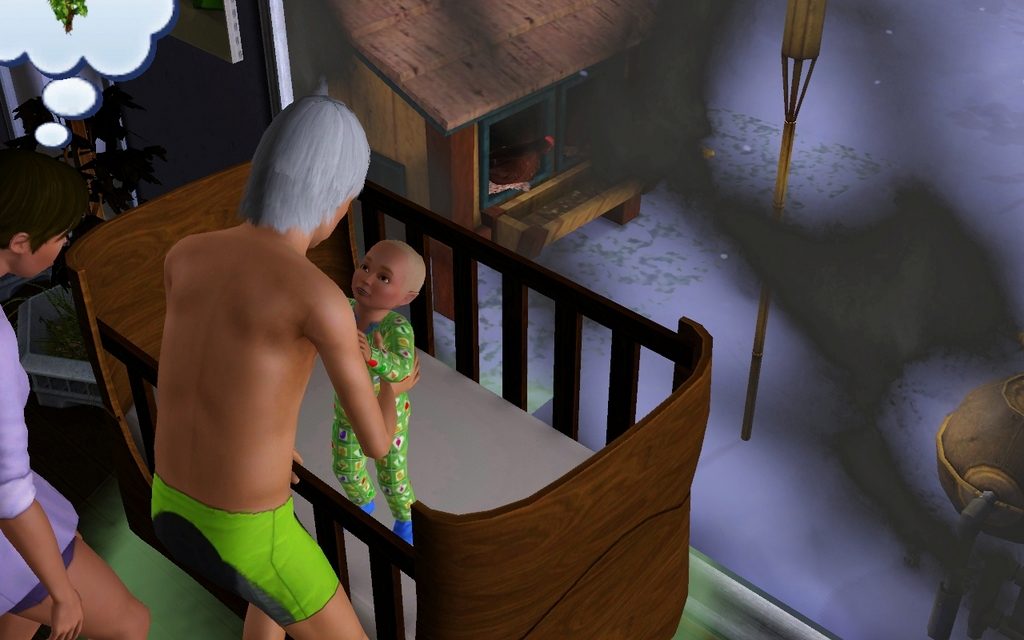 I bought another cake, but it kind of didn´t work, so Liam takes a little nap and ages up in the middle of the night instead. 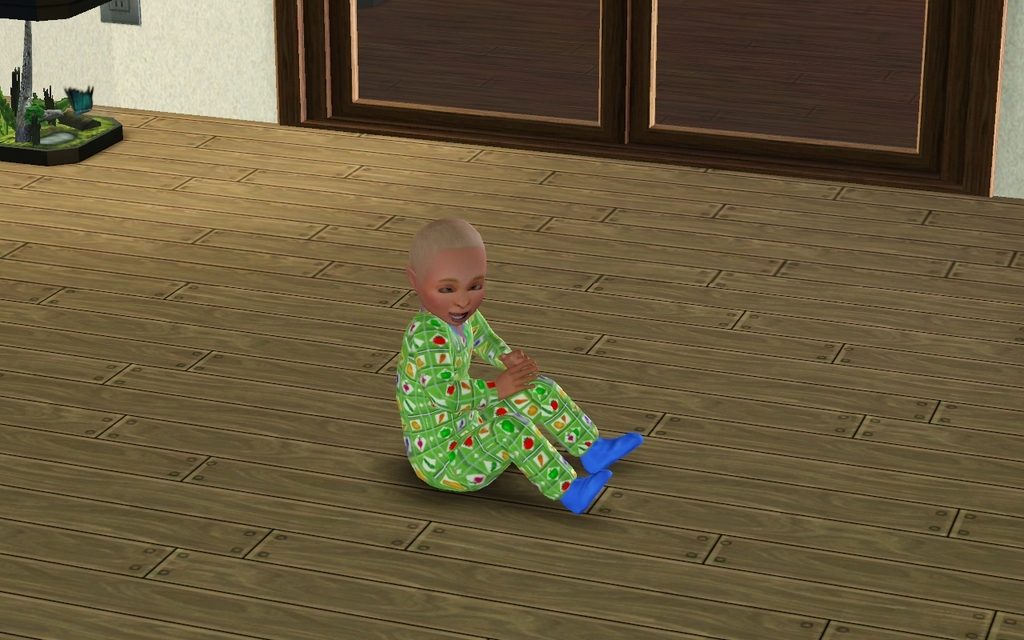 He picked the coat himself. Who am I to change it?

I got the message, that Kym married some Jaron Weissweiler. My game is a bit wonky when it comes to distinguish between male and female names, so I send Randolph to explore. 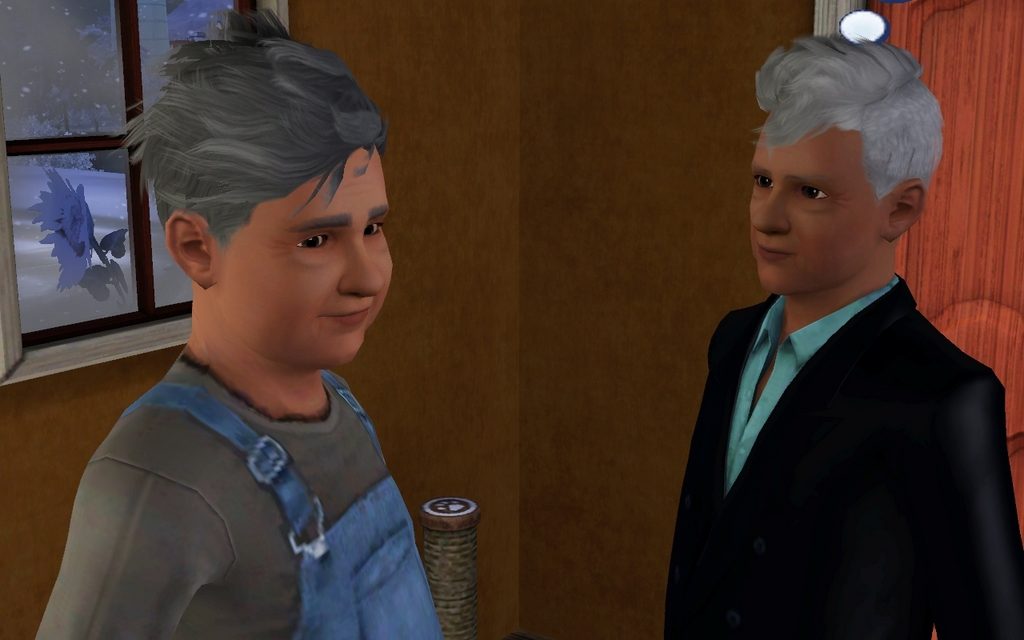 Nope, my straigt-as-a-ruler Kym married a guy. That´s actually the first autonomous gay marriage in my game, so I got pretty excited.

I give him a little makeover. So this is the love of Kym´s golden years. He´s good, family oriented, artistic, nursering and an angler. They live in a little house with an orange tabby kitten.

They are so cute, I saved them to the library. Some day, when I´m feeling brave, I may start a story based legacy with them.

Randolph: Uhm, this is getting a bit awkward. Can I go home now?

Only two days later I got the notification, that Kym died. That mad me sad. 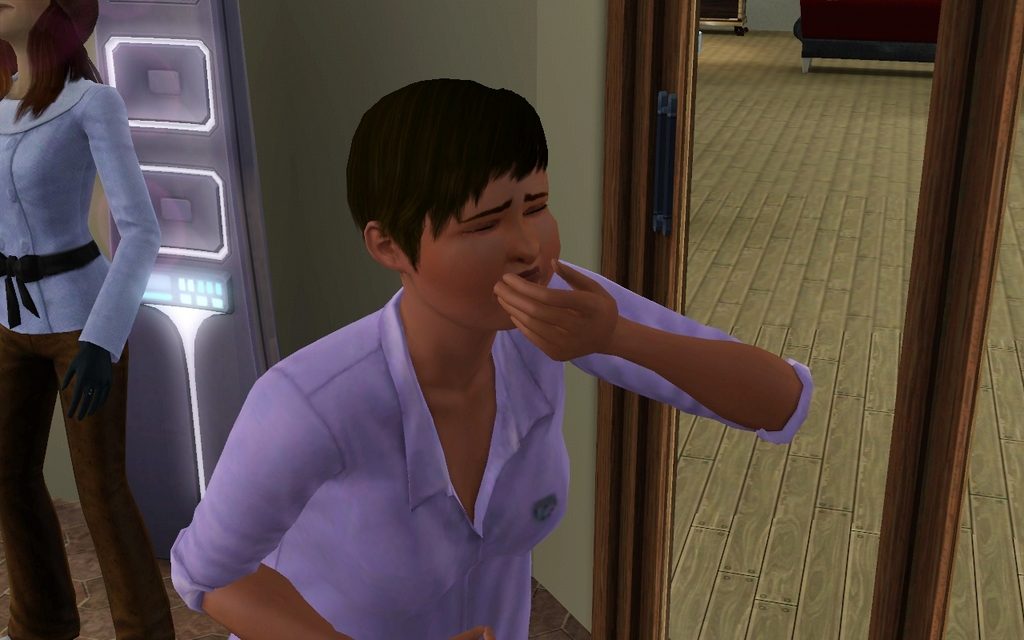 She discovers that she´s pregnant, while Miles and Gabby are having a little tiff outside. 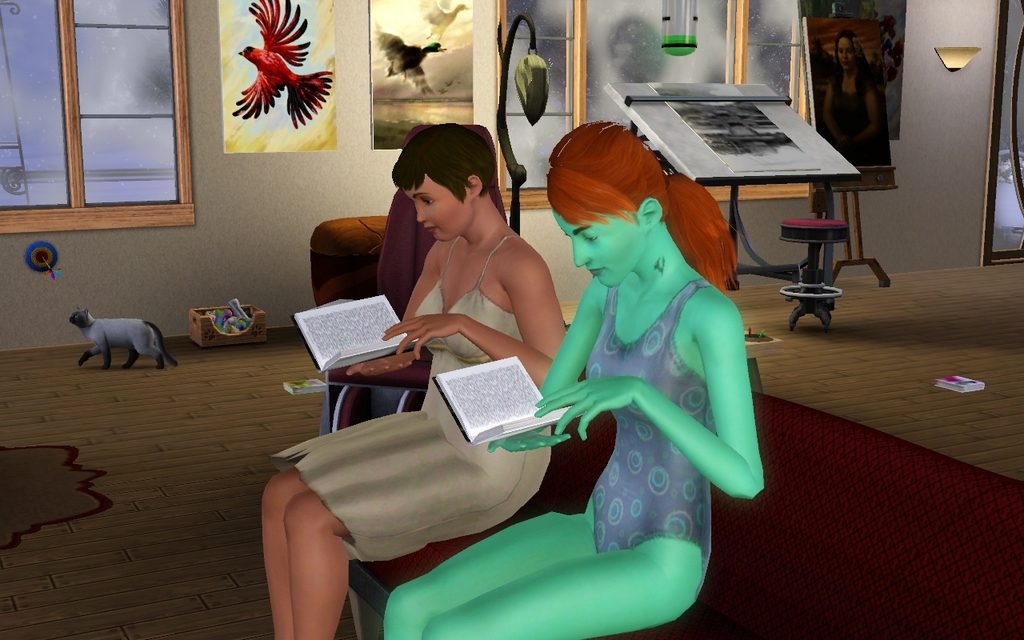 I don´t think I had combined pregnancy book reading since Violetta and Paul. 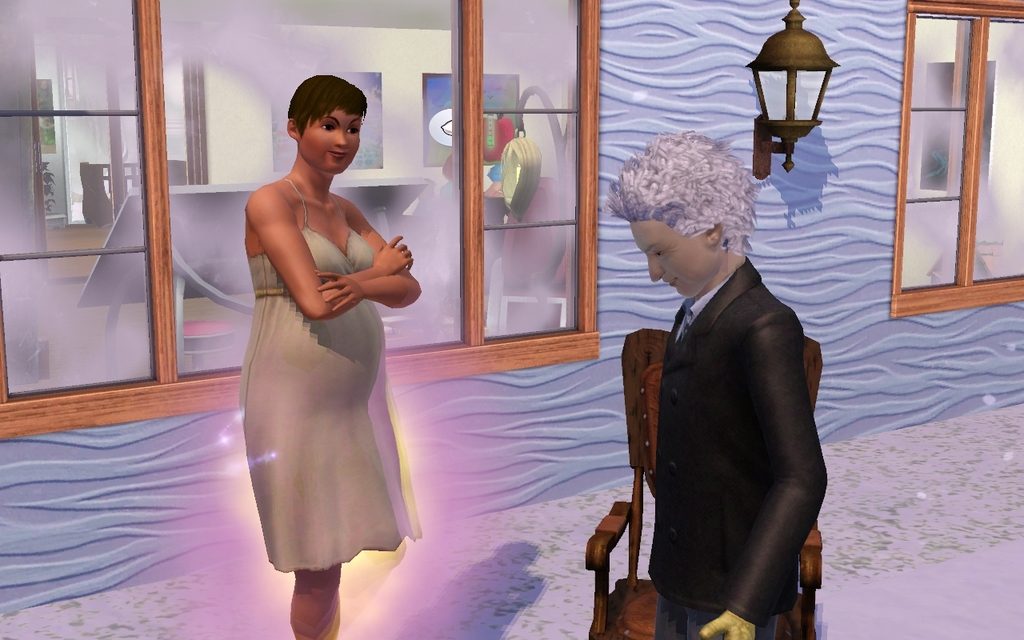 She has to be the happiest pregnant sim ever, alway cooing over her belly. 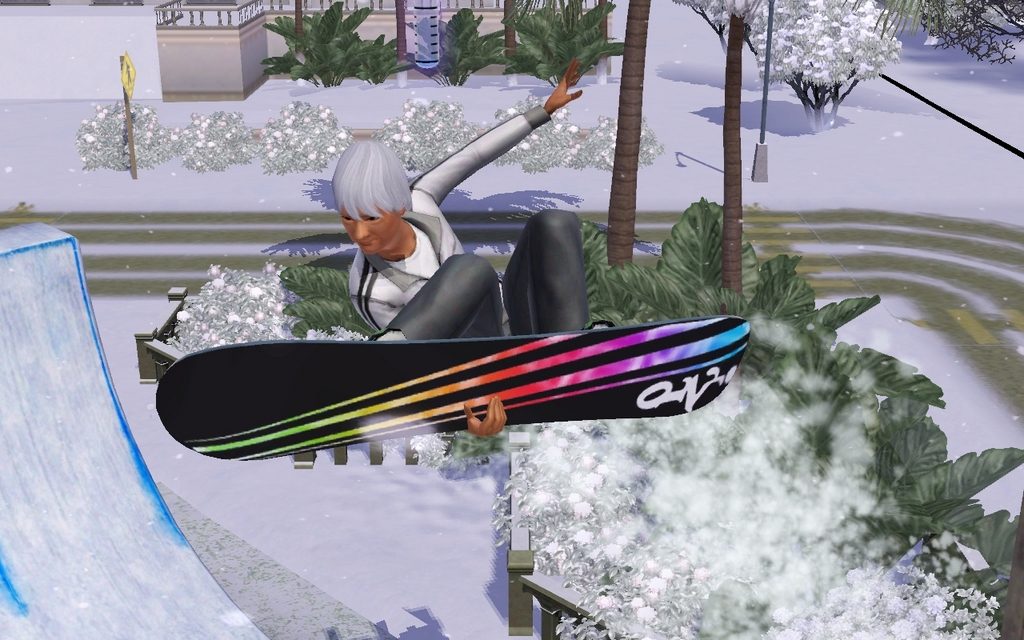 Randolph is pretty fit for his age.

Isolde: I think, I´m getting the baby now.

Isolde: This hurts quite a bit!

Kisa: Is she done yet? 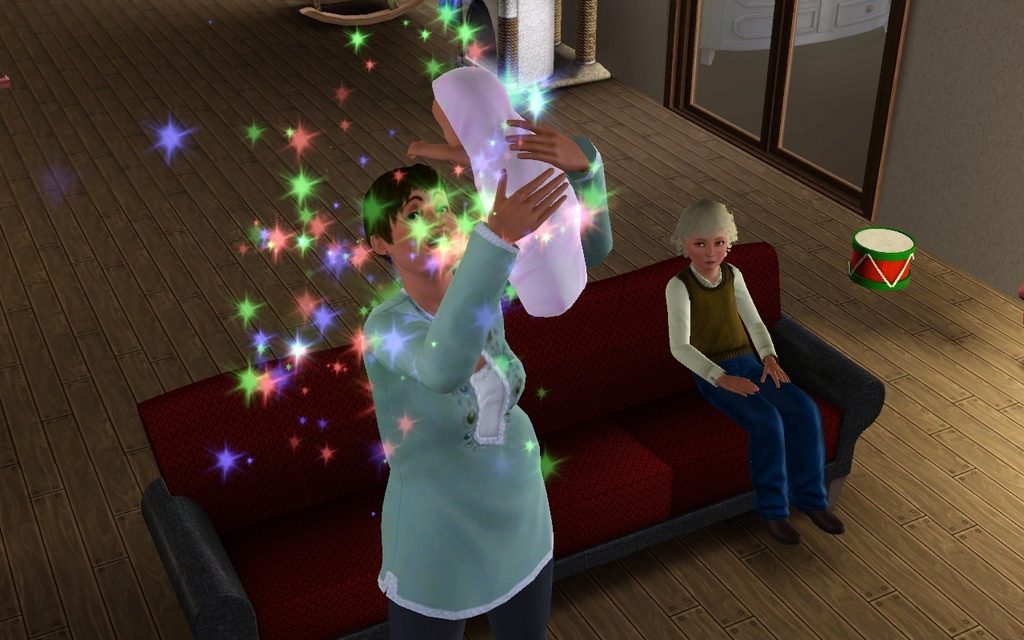 Here we have little Crystal. She rolls good and loves the heat. Liam doesn´t seem to be thrilled. 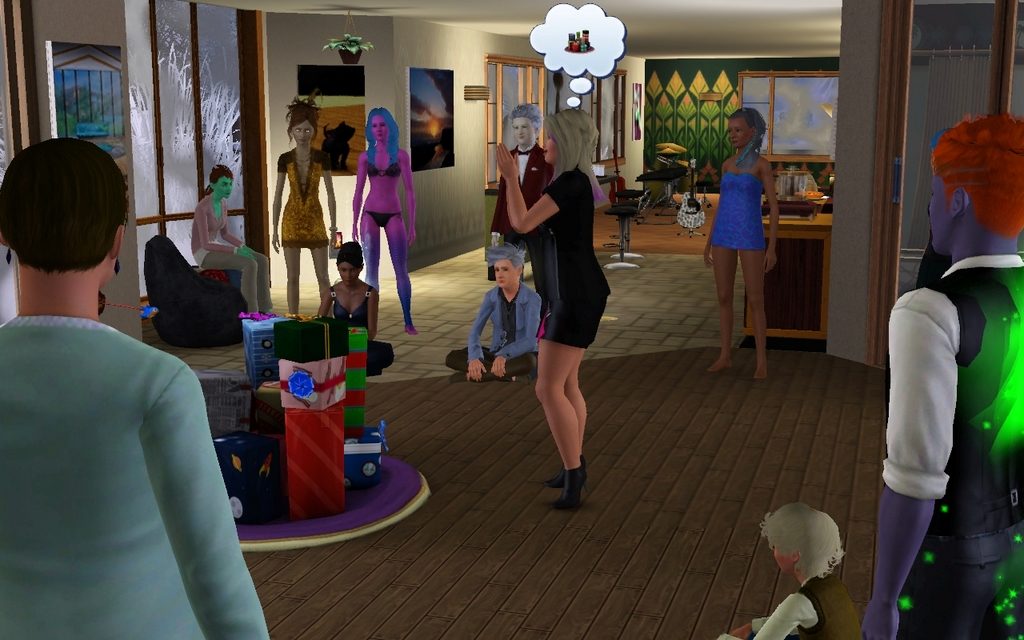 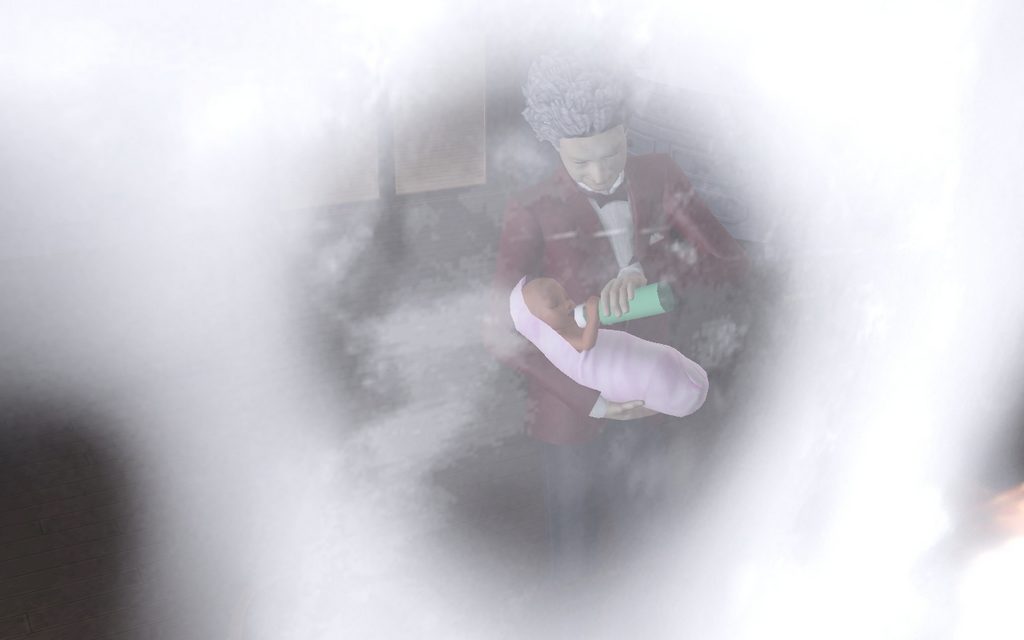 Miles gives his granddaughter her first bottle. I never thought, he will live to see her, but he´s stubborn that way.