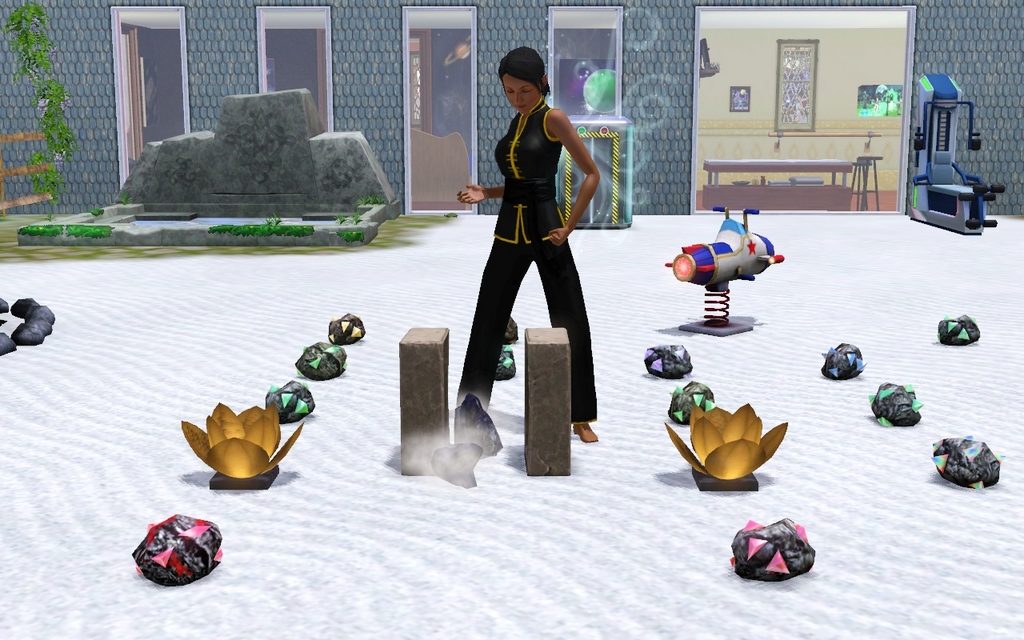 It´s kind of neat to have Kisa back in the house – she brakes space rocks on a regular basis. 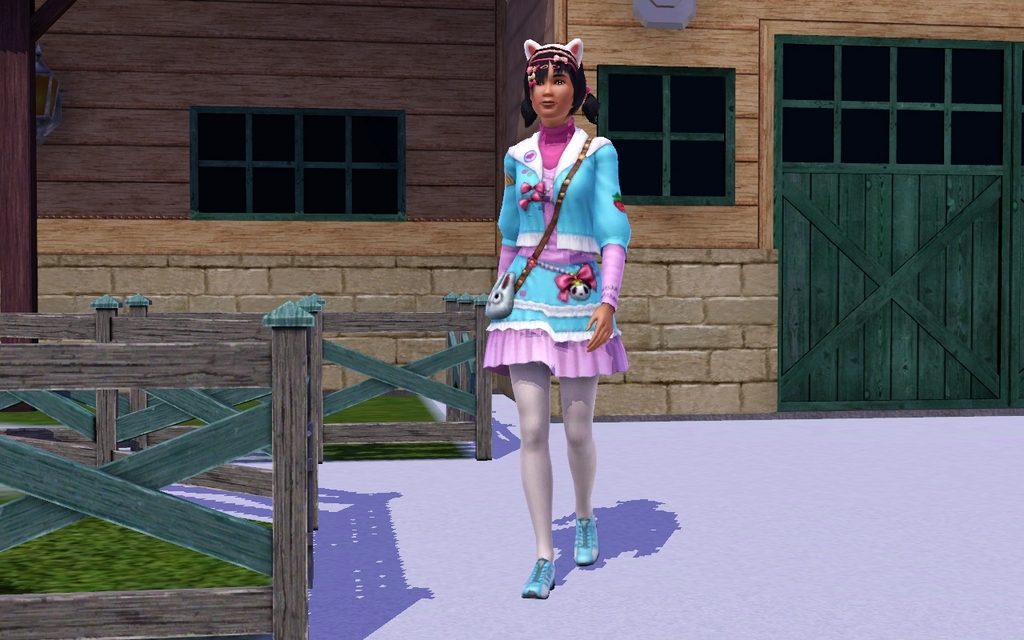 Crystal wanted to learn riding, so I let her take lessons. I found a nice outfit for her at the store. I wanted to give it to her as a teen, but it´s only for young adults and adults. Why?? It would be perfect for teenagers! 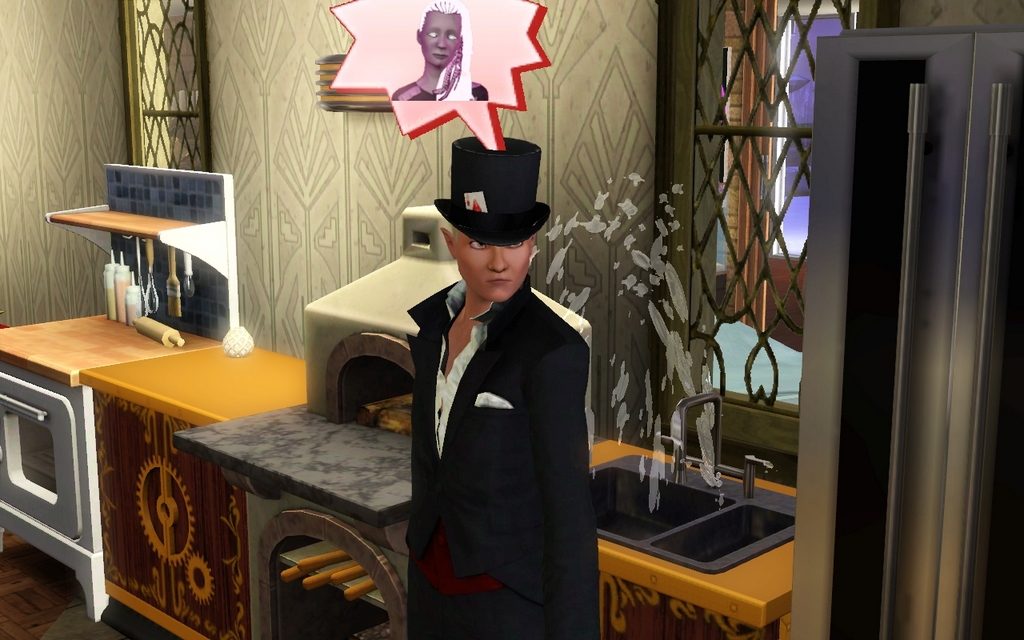 Liam is still sad about his mom´s death. Speaking of which, I fenced in the cow plant, because I didn´t want any more casualties, but there´s still Connie´s milk, so I wanted to keep the plant, until I decided, who should drink it.

Arille is near her adult birthday but still doesn´t have a partner. So I downloaded one for her.

Stoutland Miller from the Moustachy ISBI (it´s on hiatius, but it´s awesome). He´s artistic, a couch potato, loves the cold, is a hopeless romantic and a dog person. And he has the cutest ears ever.

Turns out, his downloaded form is one day from adult. I guess, he can drink the milk then.

I sold the cow plant after this. 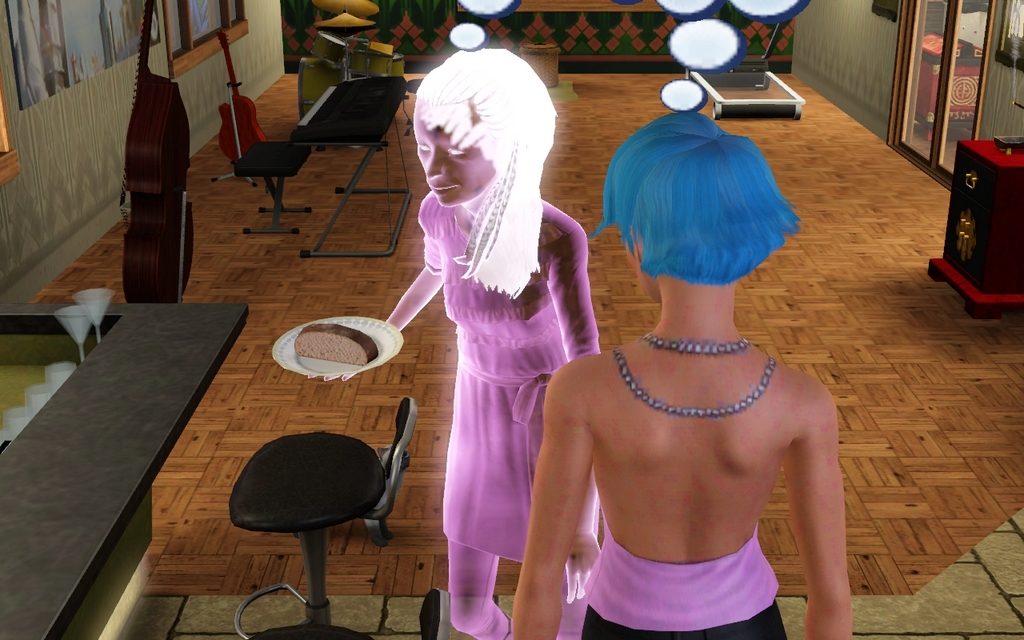 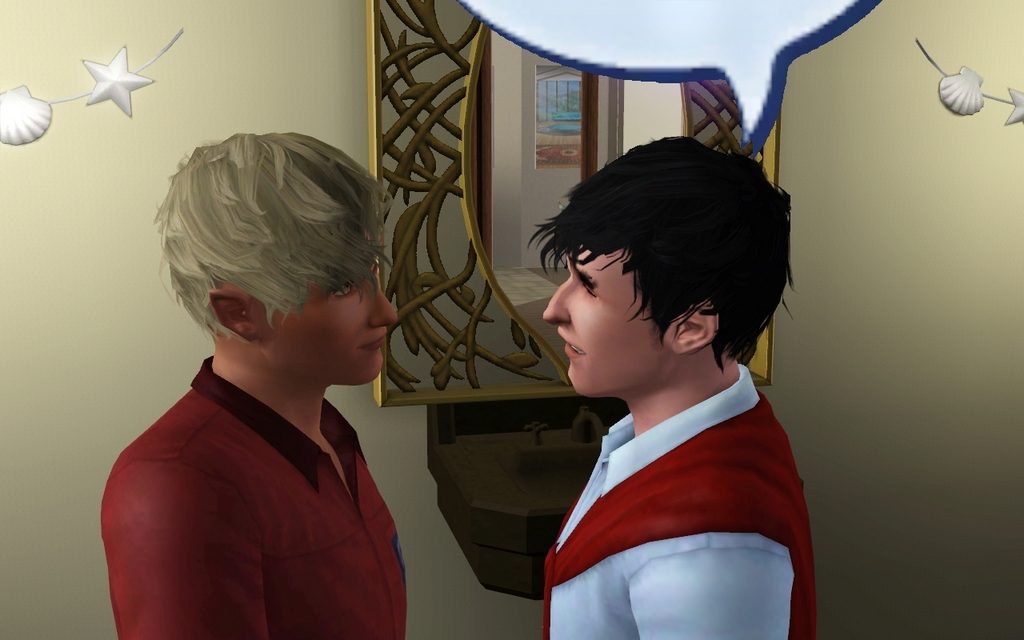 This is looking good. (I mean, they have the same hair. It´s destiny.)

Arielle and Stoutland hearfart each other twice – when I added him to the household, and when they first talked to each other. Nice. 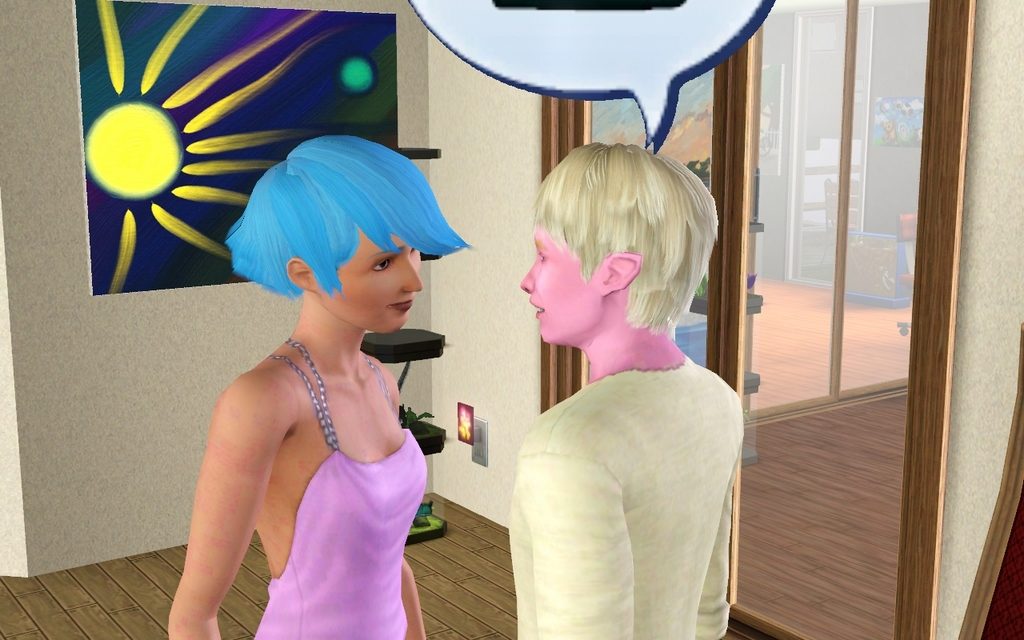 So I send them on a date. 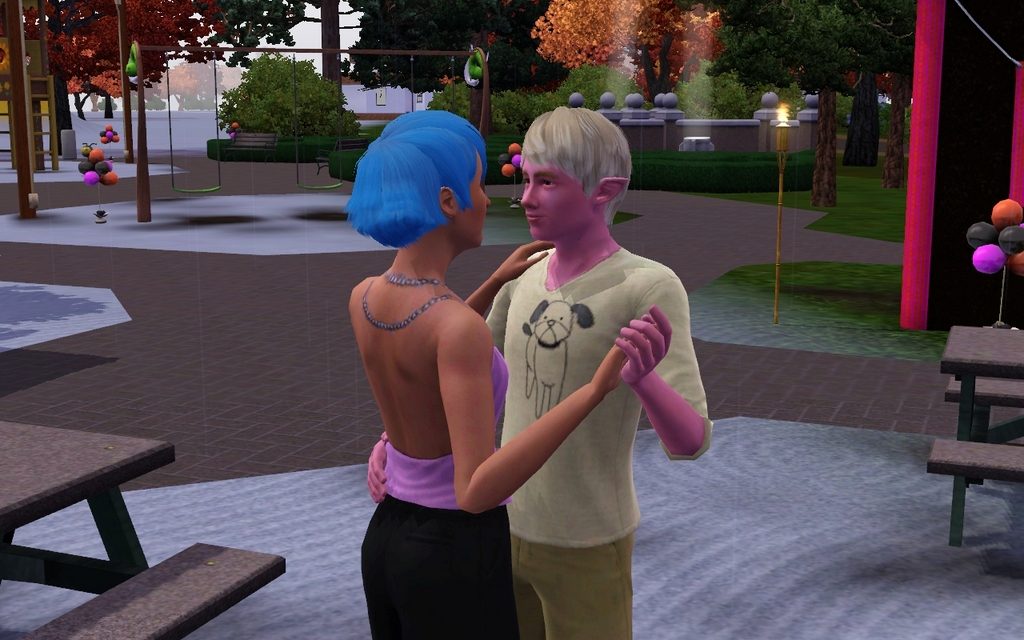 Stoutland wants a face painting but it turns out bad. 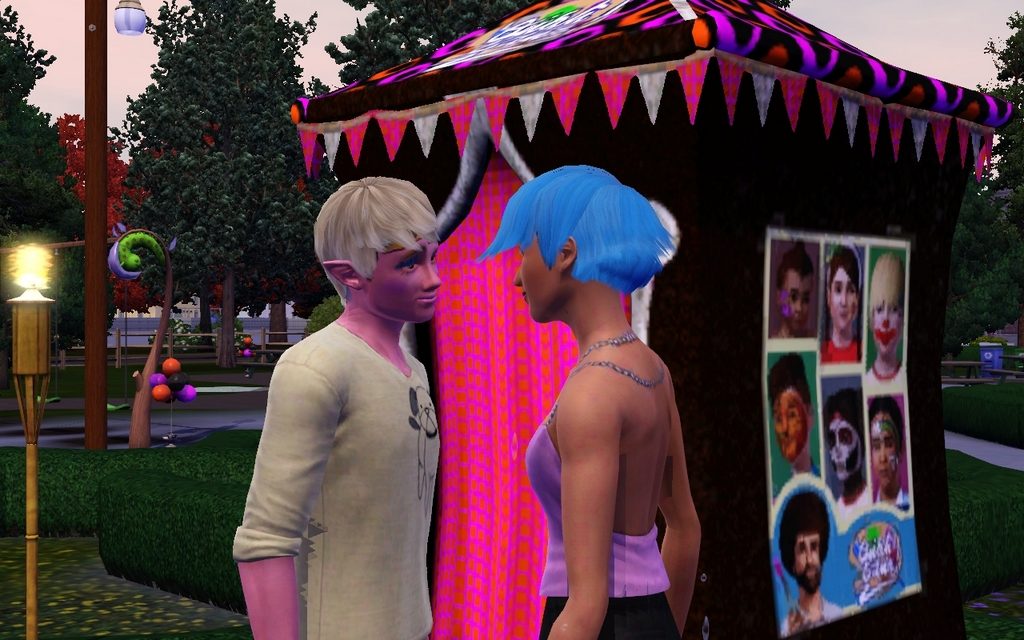 Arielle cheers him up. 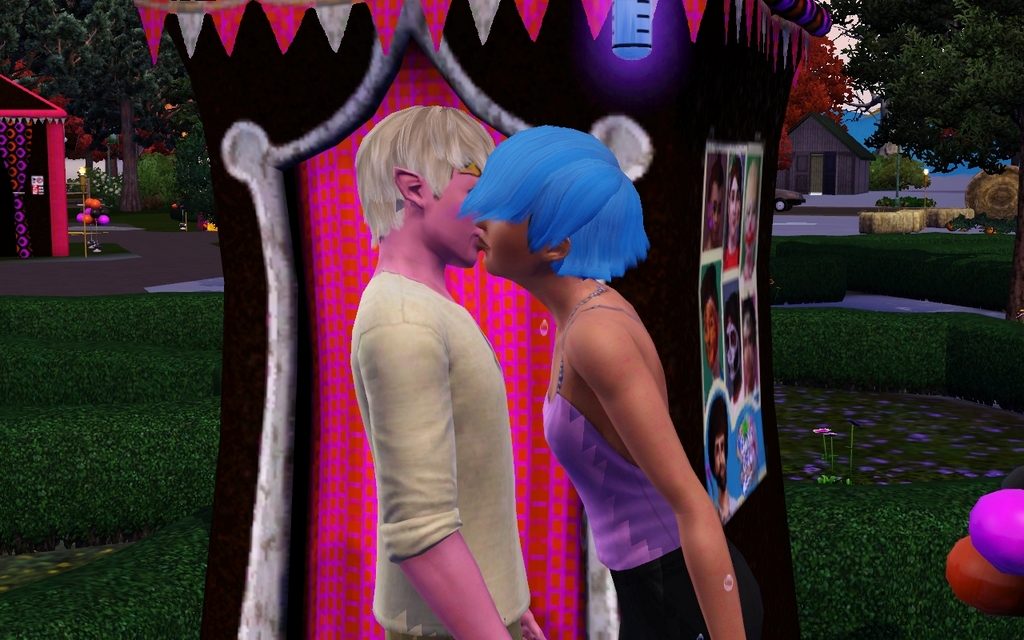 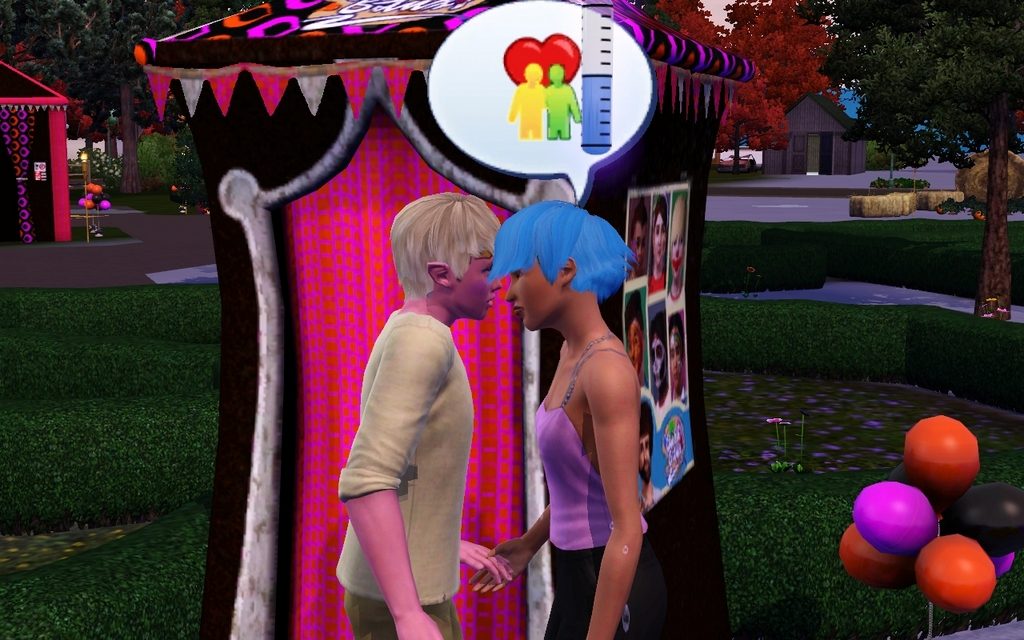 The second one gets to tie the knot in their underwear in the kitchen. That´s much more Sims, anyway.

Crystal: I need a drink. 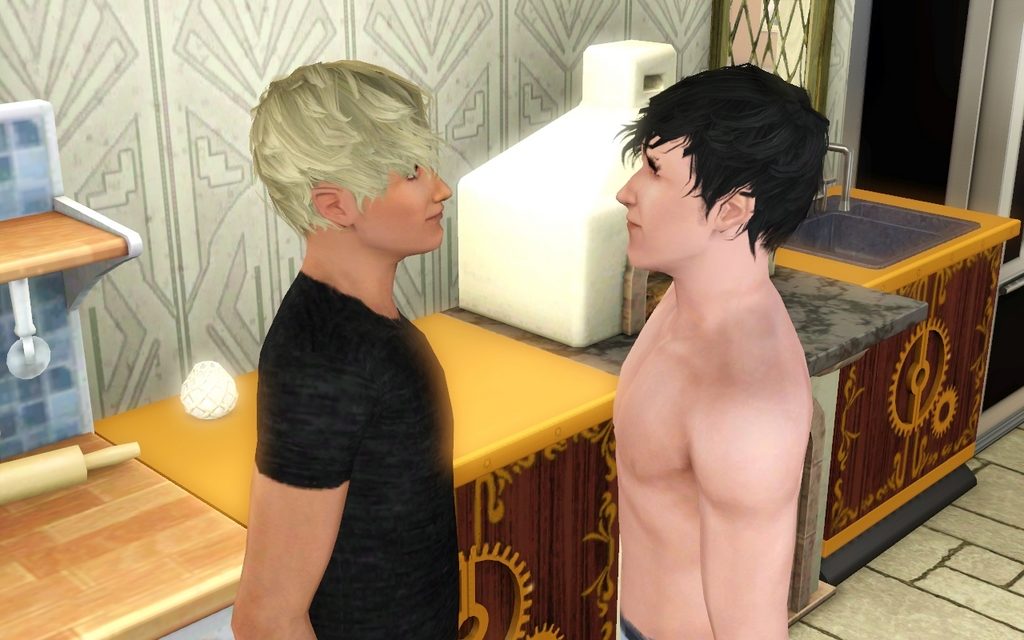 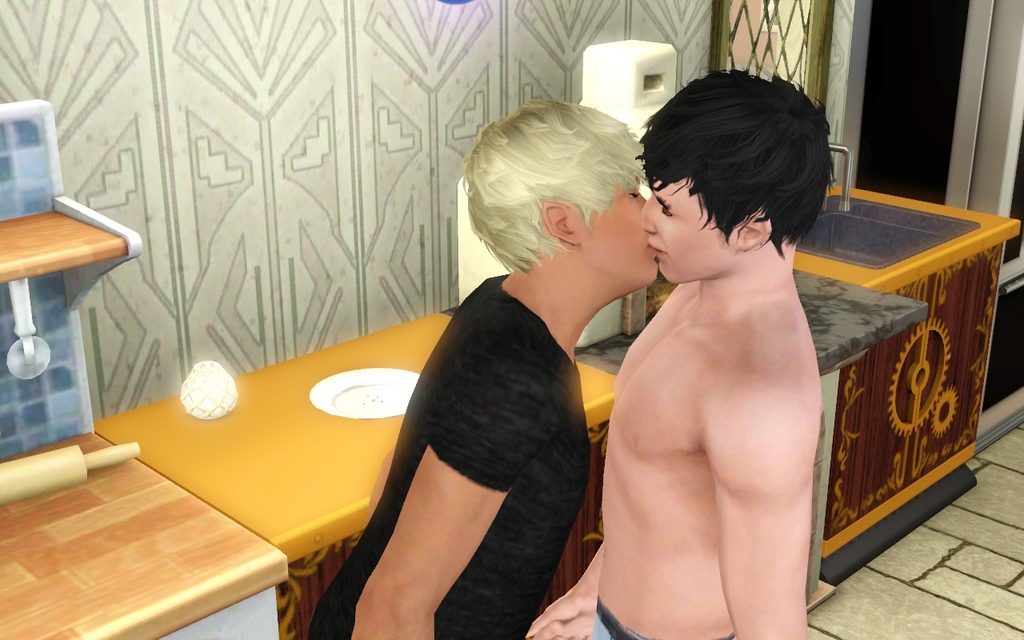 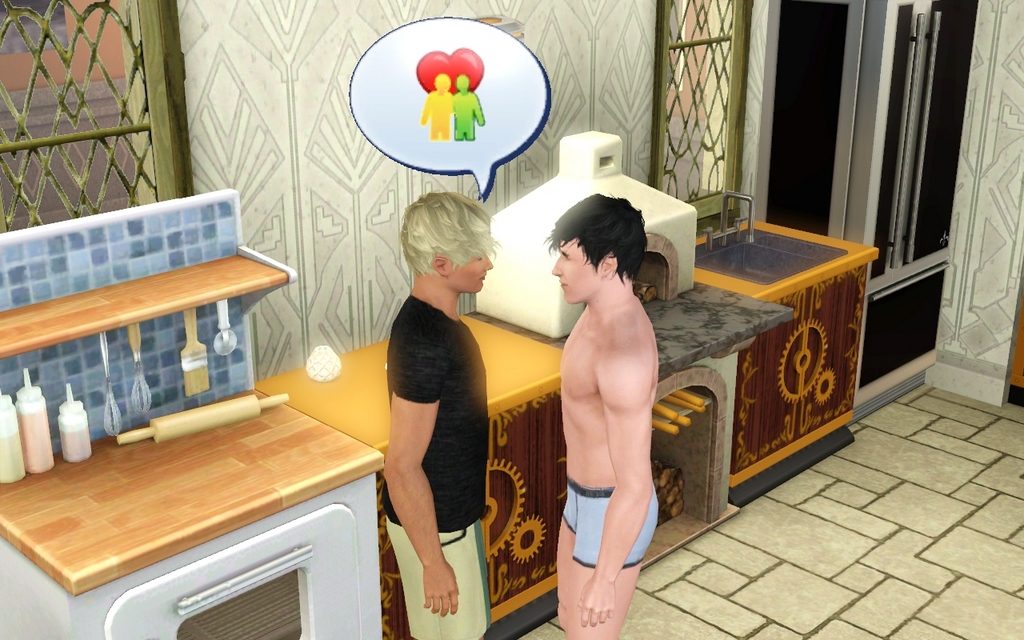 For some reason I decided to do this with all of them at once, which resulted in some mad back and forth zooming. But all is well.

Liam and Mortimer have some difficulties finding a bed to consume their relationship, though. 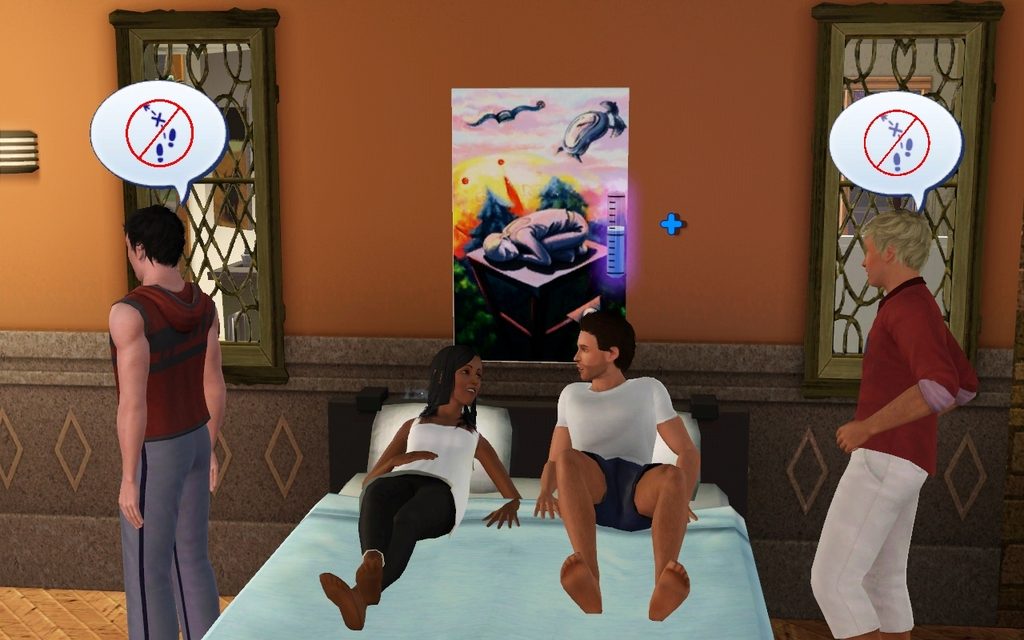 You know, we have three double-beds.

Liam: But I want this one!

Mortimer: I refuse to look! 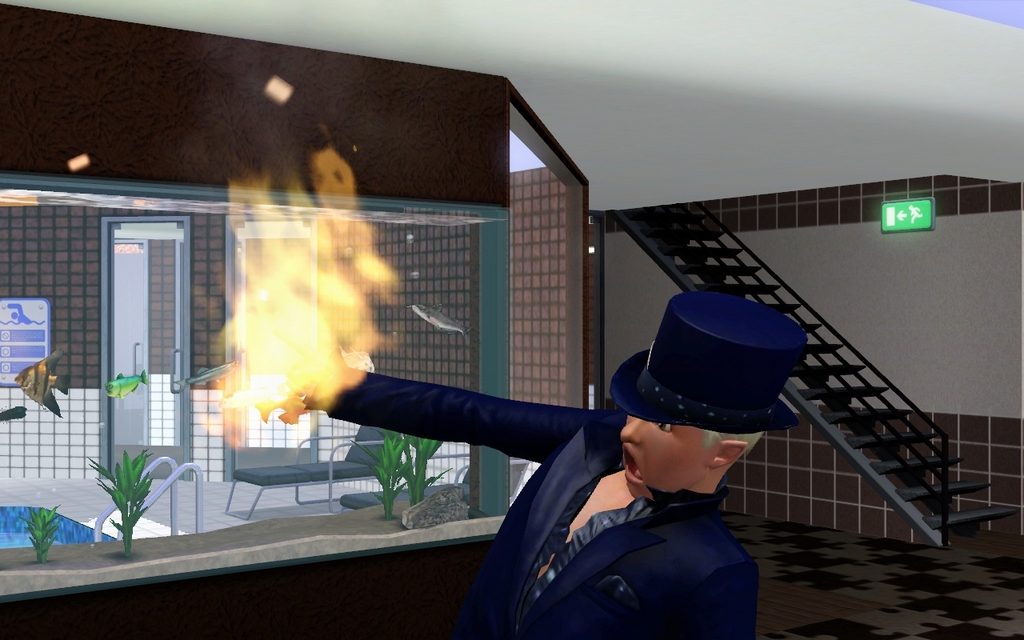 Back to performing for tips. Liam always sets himself on fire with this trick. 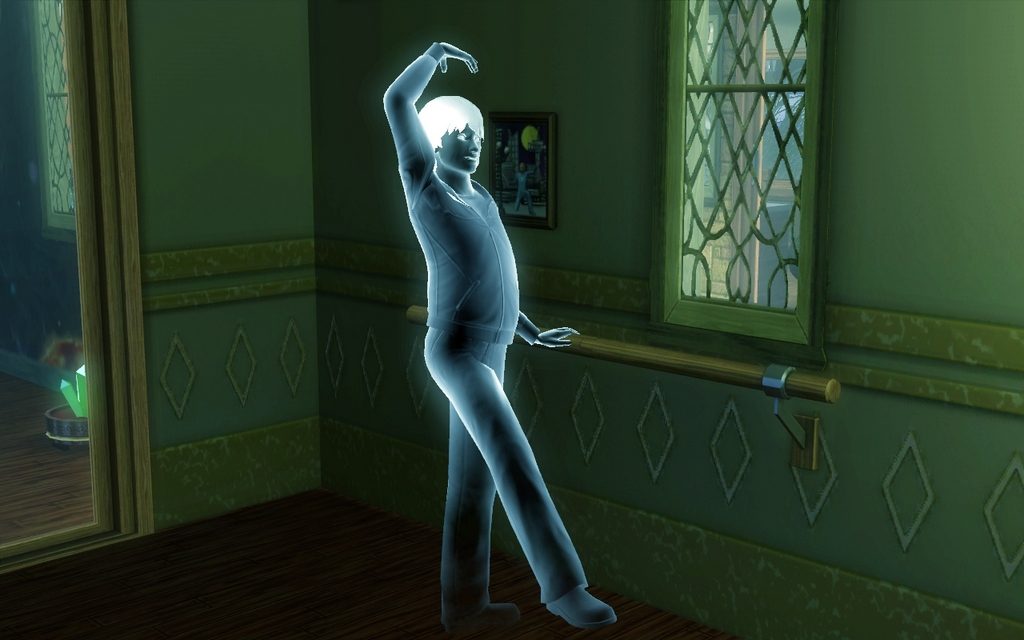 Randolph is pretty active, even as a ghost. The other ones normally just sit in one of the rocking chairs. He will stay at the main house, ´cause I love him. 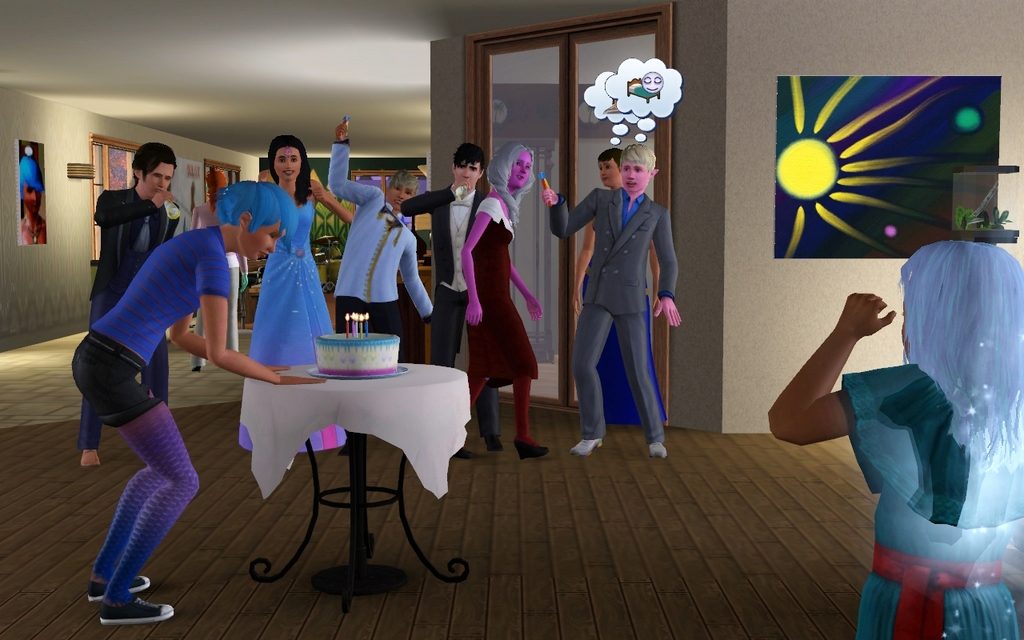 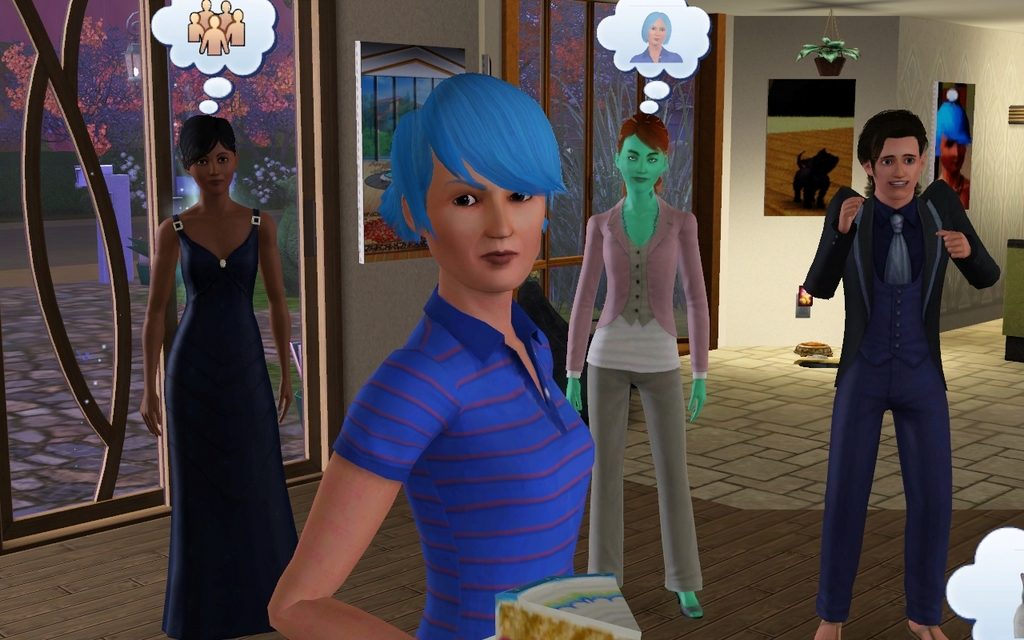 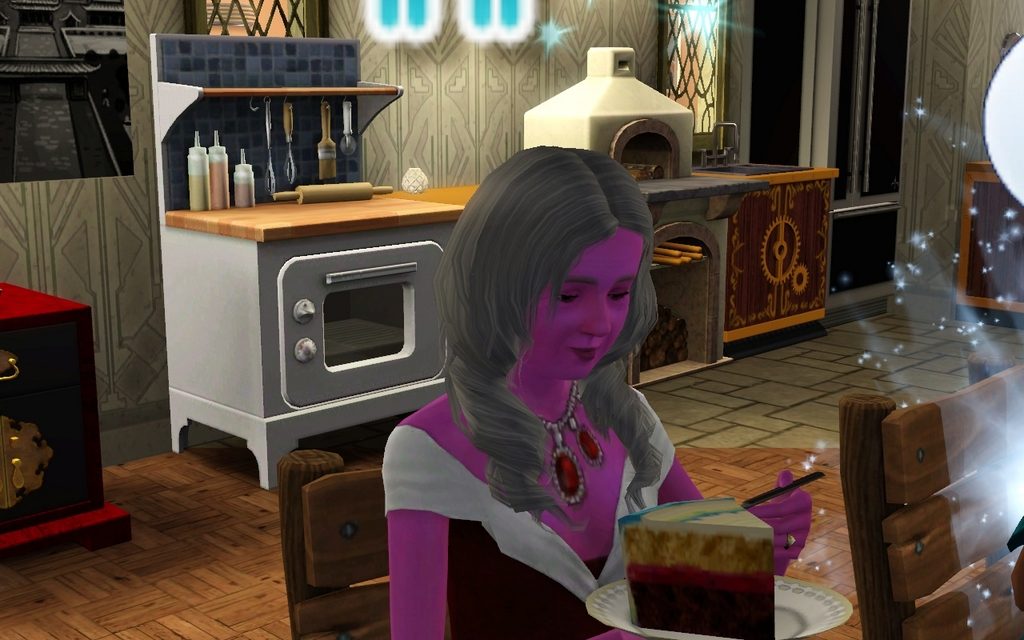 The last picture of Beverly, she died shortly after the party. 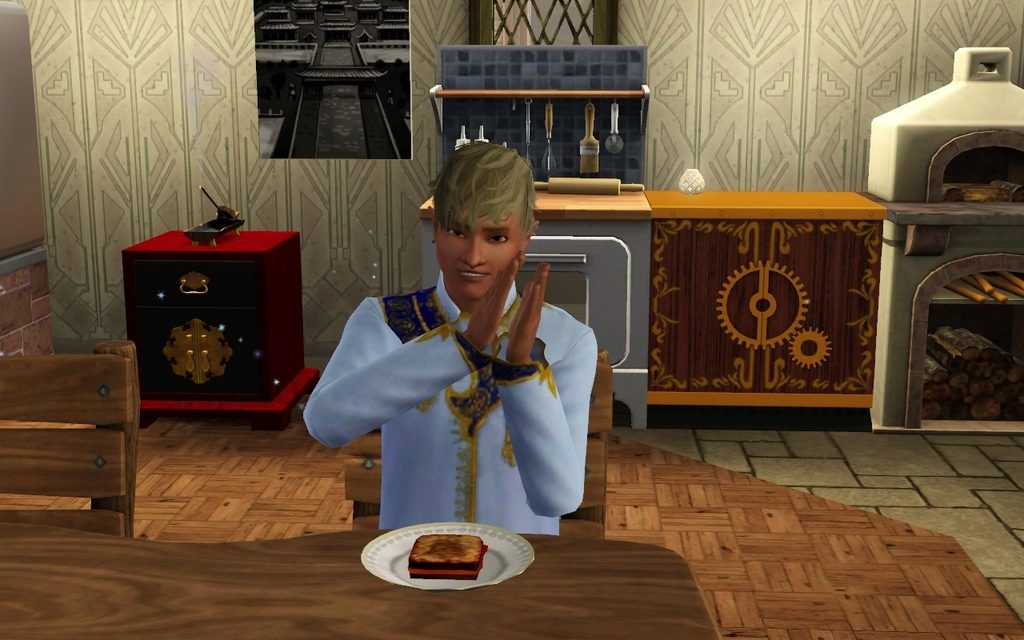 Someone brought grilled cheese, Liam´s favourite. For some reason, no one in the house can make it. 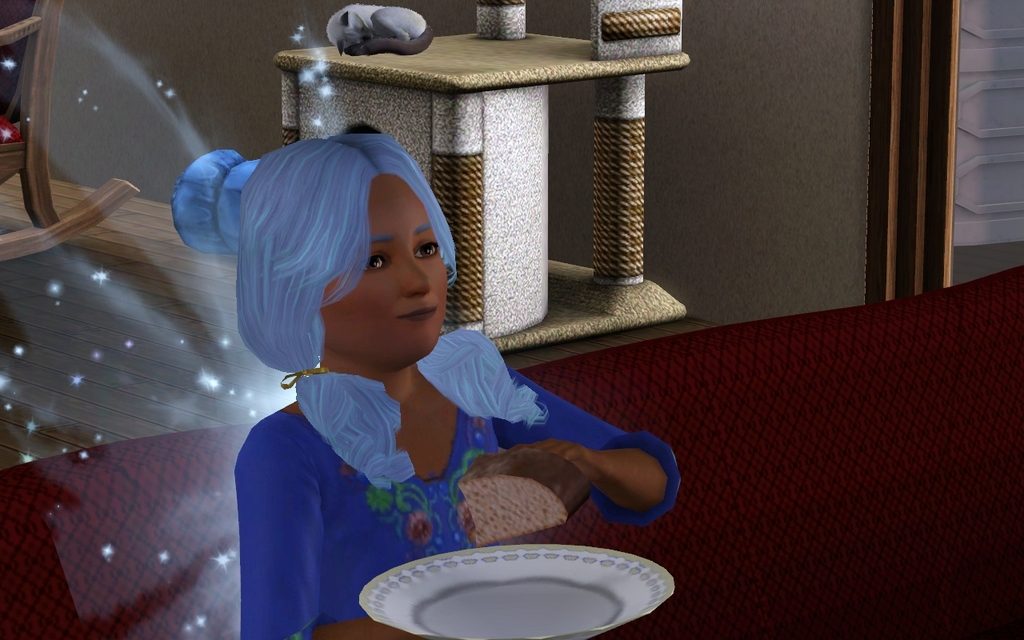 Marina will also age up soon. 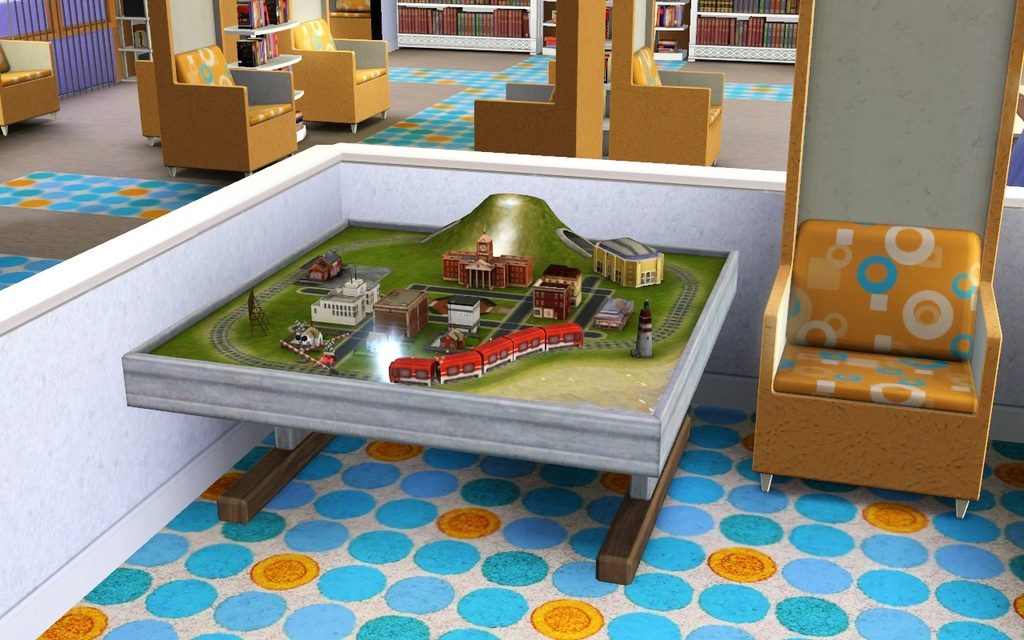 I let her play with the train at the library. 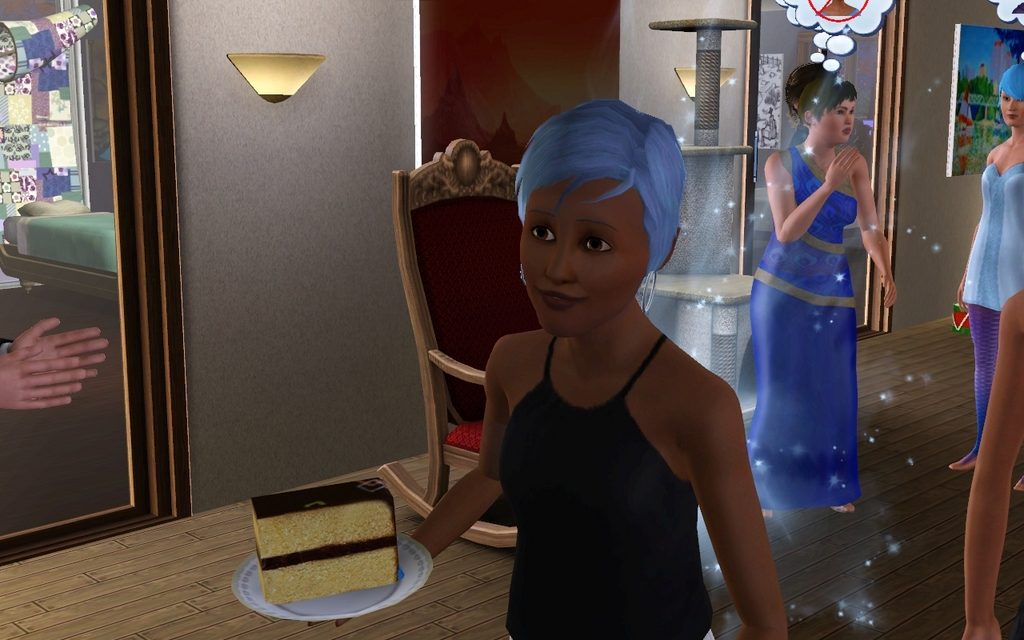 She now looks best in short hair. I changed her face a bit – she inherited Kisa´s face one, so I made her look more like her dad.